Beat the Asthma Blues Report: Overcoming asthma to live a fulfilling life in Singapore 5 May, 2021

Research into how people with asthma in Singapore manage the condition

WHY WE CONDUCTED THIS SURVEY

Background
In the last 30 years, asthma treatment has transformed as understanding of the condition has grown. Most people with asthma can live normal and fulfilling lives if they manage their condition effectively with the support of their healthcare professional. In Singapore, patient outcomes have significantly improved, particularly due to the increased use of preventer inhalers (inhaled corticosteroids (ICS)), which treats the underlying inflammation that causes asthma. Asthma mortality rates dropped from 5 to 1.2 per 100,000 of total population in the last 30 years, similar to other developed countries[1].

Singapore’s national guidelines for asthma management recommend that all people with asthma aged 6 years or over should not solely use a blue inhaler[2]. Instead, most people with asthma should use a preventer inhaler as the main way to control asthma. However, many people over-rely on the blue inhaler (reliever inhaler or Short-acting Beta Agonists) to alleviate asthma symptoms but does not treat the cause of asthma and can disguise a worsening of the condition. A recent Singapore-based clinical study revealed that a third of patients who attended hospital for severe life-threatening asthma were only using the blue inhaler to manage their condition[3]. People who are not controlling their asthma well may experience symptoms such as fatigue and difficulty sleeping, which can affect their mental wellbeing.

About these insights
This survey, carried out in partnership with AstraZeneca, was intended to give some insights into how people with asthma in Singapore perceive their condition, how it affects their lives and their attitudes towards the blue inhaler. The findings suggest that a sizeable portion of patients in Singapore are unclear about how to manage the condition effectively and this is having an impact on their quality of life, both physically and mentally. Similar international research has seen similar results.

Perceptions of Asthma in Singapore: Findings at a Glance

This research suggests that, although many people are using the right medication, many people with asthma may not be managing the condition optimally and that this is affecting their quality of life. A sizeable number of survey respondents reported that they experienced asthma symptoms regularly, and that asthma affected their ability to do physical activity and sleep at night. A sizeable minority also reported that it is affecting their mental wellbeing.

The survey suggests that a third of people with asthma (33%) feel like they would like more support and information from their doctor about how to manage their asthma.

The final sample of 414 people with asthma consisted of 293 adult asthma patients and 121 parents of children aged under 18 with asthma. 53% of respondents identified as male and 47% as female. We estimate that there are approximately 330,000 people with asthma in Singapore (adults and children), so this was a representative sample with a confidence interval of 95% (+/-5%). For the subgroups of adults and children, the confidence interval is 90% (+/-10%).

All age groups are represented in a similar proportion to the population of Singapore. Respondents included people who had recently been diagnosed and those who had been managing the disease for some time.

Attitudes Toward the Blue Inhaler

Singapore’s national guidelines for asthma management recommend that all people with asthma aged 6 years or over should not solely use a blue inhaler[1]. Overusing the blue inhaler can increase the risk of asthma attacks as it can mask a worsening of symptoms.

This is something that is an issue worldwide. According to research conducted by the Asthma Society of Ireland and hmR Ireland, seven in ten asthma sufferers are using more than three reliever inhalers a year[2]. The research also suggests that within five years of diagnosis, half of the asthma population are over-reliant on their reliever inhaler. Over in the US, nearly 24.3% of all adults and 18.7 % of all children self-reported active asthma used Quick Relief Medication (QRMs) frequently in the past 3 months[3].

However, what are the attitudes in Singapore to the blue inhaler and how do they differ from others?

Use of the Blue Inhaler

This research suggests that most people with asthma have a blue inhaler, but how frequently it is used varies considerably. Of the adults with asthma who were surveyed, 14% reported using the inhaler three or more times a week, a sign that their asthma is not being controlled effectively. Encouragingly, almost half (49%) of adult respondents used the inhaler once or less in a week.

Use of the Preventer Inhaler

Most people with asthma who are aged over 6 years should regularly use a preventer inhaler (steroid-based inhaler) instead of over-relying on the blue inhaler. The preventer inhaler treats the underlying inflammation that causes asthma and needs to be taken regularly.

The research suggests that an overwhelming number of adults and children with asthma use a preventer inhaler. However, it is unclear how often people use the inhaler, while perceptions and attitudes expressed suggest that many people with asthma may not be using it regularly, which would mean it is not necessarily effective.

Attitudes Toward the Blue Inhaler

Understanding over-reliance on medicines is complex. The survey asked a series of questions to measure how reliant people are on the blue inhaler. These questions are adapted from the validated and globally used ‘Beliefs about Medicines Questionnaire’, a questionnaire to measure attitudes to medicines that was developed by behavioural medicine expert Professor Rob Horne in collaboration with the International Primary Care Respiratory Group (IPCRG), a clinically-led charity headquartered in Scotland . These questions are designed to elicit whether patients’ perceptions of the blue inhaler could lead to over-reliance.

Looking at adults with asthma:

The research also suggests that there is not sufficient awareness among some patients of the potential risks of overusing the blue inhaler. 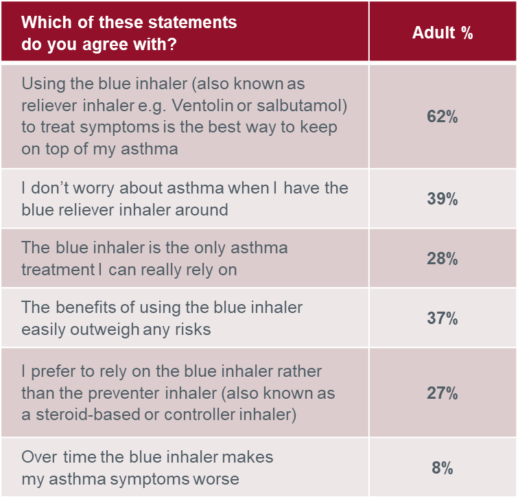 ASTHMA’S IMPACT ON QUALITY OF LIFE

People with asthma should be aware of the symptoms they are experiencing. Frequent or severe asthma symptoms can indicate poor asthma control or poor inhaler technique, which may need to be discussed with a healthcare professional. Needing to attend hospital because of asthma symptoms is also a strong indication of poorly-controlled asthma.

International research has shown that quality of life is affected by asthma. A study in Australia showed that asthma was an important contributor to the burden of ill health and impaired quality of life in the community[1]. A piece of Saudi research found that it affected the quality of life for adolescents, both physically and emotionally[2]. This was also found to be the case in the US with the Asthma and Allergy Foundation of America exploring this in their recent report[3].

However, if asthma is well controlled most people can live normally active lives.

But would this be the case in Singapore as well?

Frequency and types of asthma symptoms

A little over half (51%) of people with asthma reported that they experienced symptoms two or more times per month.

In the worst cases, one in 10 adults with asthma reported having symptoms on most days, and a further 4% are experiencing symptoms day and night. These are people who are likely to have poorly controlled asthma and should speak to their doctors about how to better manage their condition.

Attending Hospital Because of Symptoms

Having to attend hospital as a result of asthma symptoms is an indication of poor asthma control. About two in five (42%) adults with asthma reported attending hospital in the last 12 months, with almost one in five (19%) reporting that they had been to hospital repeatedly during that period. Similarly, the survey suggests that 43% of children asthma patients have attended hospital in the last 12 months, with 17% attending hospital two or more times during that period. This suggests that patients are not as well controlled as they may perceive.

Impact of Asthma on People’s Lives

Asthma can worsen at night and it is also known to affect sleep[1]. The research revealed that most adults surveyed had woken up at night due to asthma in the last four weeks – 30% once, 22% twice and 8% three or more times. This could also have an impact on their daily lives.

Our research suggests that asthma has an impact on mental wellbeing in Singapore. 42% of adults with asthma said they often or always felt down of their asthma. One in 10 people with asthma reported always feeling down because of their condition.

The numbers are smaller in children but are still a notable minority; 29% of parents of children with asthma said that their children often feel down because of their asthma.

People with well-controlled asthma can live normal lives with relatively few symptoms. A quarter of adults with asthma shared that they were particularly proud of doing despite having asthma. These included being active – many said they enjoyed jogging, swimming, playing active sports like soccer and rugby, as well as playing music and exploring their creative side.

Parents of children with asthma were significantly more likely to be proud of their children’s activities, with almost two out of five (38%) highlighting an activity.

Attitudes Toward Asthma in Singapore

Despite asthma being a common treatable condition in Singapore, the research suggests that a minority of people with asthma feel embarrassed about asthma and even view it as taboo.

Over a quarter (28%) of adults with asthma feel embarrassed (often or always) to admit they have asthma. A further 19% of people with asthma think that having asthma is taboo in Singapore.

Information and Support about Asthma from Doctors

Working with a healthcare professional is important for good asthma control. A third of adults with asthma (33%) said that they would like more support and information from their doctor about how to manage their asthma. This is a sizeable portion of patients that we surveyed, who feel they need more support.

Parents of children with asthma said that they would like more support from their doctors, with two in five (41%) parents expressing the need for more information from their doctor on how to manage asthma.

The survey suggests that asthma is affecting people’s lives in Singapore more than it should, both physically and mentally. The report recommends that: